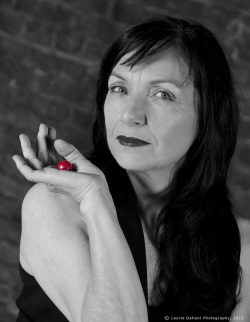 From the Bay Guardian (May 2012)
Catherine Debon's Alma Colorada, which also won a "Best of the Fringe" in 2011, is an emotionally-charged, experimental roller-coaster ride that appropriately begins and ends on a train. Detailing a family history fraught with World War II resistance fighting, concentration camps, communist sympathies, and endless trains, Debon nimbly vacillates between the neuroses of the present day and the deep despair of the past, while still finding a way to end to piece on a triumphal note.    (Gluckstern)
Seeing you embody your story, your relationship with your parents, your pain, your passion and strength, I am in touch with the fullness of being alive.  Thank you for being so brave and real.
Shira (1999)

Catherine Debon's one woman show is brilliant and moving.  She creates a nuanced and powerful character--her 93 year old French grandmother--and demonstrates the profound love between grandmother and granddaughter.  Debon's use of multimedia--photographs, phone, and the sheer physicality of her performance with a dancer's strength and versatility are awesome. 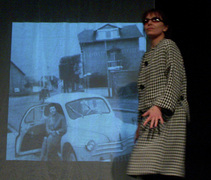 I have seen few pieces which have touched my heart as this piece does.  It is personal without being self-indulgent.  Debon skillfully reveals to us the complicated relationship of her family and her deep connection with her beloved grandmother.  Debon is truly brilliant as she weaves language, music, movement, and photographies into this deeply moving portrayal of love and mortality.  Superb!
Molly S. (2004)

Damn, girl! Congrats on such an electric performance.

Merci beaucoup to my director Catherine for her amazing guidance and connection.
Marianne S. (2015)

I want to thank my director, Catherine Debon, for challenging me and most importantly believing in me during this intense process.
Angélica M. (2013)
​
Merci beaucoup
​A big thank you for understanding me and supporting my vision for this piece.  Your clarity, compassion and groundedness gave way to tantrums, tears, cartwheels and confetti!
Lara G. (2012)

THANK YOU to my director, Catherine, who was an integral part of the process, a creative dynamo, and a source of strength.  Amazing!
Sarah H. (2009)

And to Catherine, a million thank you’s.  Without your vision I don’t think it would have been possible to swim through the murky waters.
Valentina T. (2009)

Catherine thank you for nurturing my ideas.  I’ve appreciated your tremendous support every step of the way.
Andrea M. (2007)

Special thanks to my director, Catherine Debon, for moving me more deeply into the work-- and holding me with her presence genial.
Maria S. (2004)